Perhaps a healthy soil is a good buffer to our own inadequacies.

As we know, water storage and availability are necessary for soil health and forage growth. 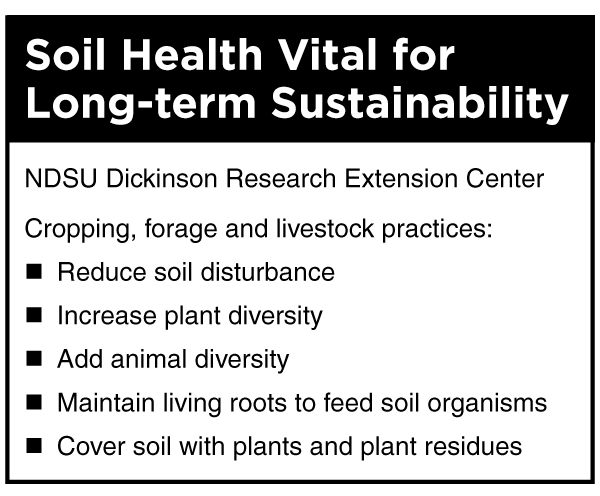 Ten years ago, the Dickinson Research Extension Center implemented a cropping system on a quarter of land. The system changed the rate of average water infiltration into the soil from 1.3 inches per hour to 10.2 inches per hour, an increase of 685 percent. Additionally, the projected average plant-available nitrogen increased from 100 to 175 pounds per acre, a 75 percent increase.

Soil is a biological system that depends on the recycling of nutrients to sustain microbial action beneath the soil surface and provide nutrients for above-ground production. The balance between the ground surface and below-ground interaction is essential for soil, allowing water infiltration, nutrient cycling and erosion reduction.

How can producers respond? To answer that question, the center collaborated with the Soil Conservation Districts and Natural Resources Conservation Services in Billings, Dunn and Stark counties in North Dakota and established the Southwest North Dakota Soil Health Demonstration Project (2008-2016). The project evaluated existing organic matter within the soil to help understand the level of feeding soil microbes that improve water infiltration and nutrient cycling.

Production practices initiated were to reduce soil disturbance, increase plant diversity, add animal diversity, maintain living roots to feed soil organisms, and cover soil with plants and plant residues. The drought in the 2017 growing season was a good test for the project. The cropping system showed how the increased water infiltration and plant nitrogen availability decreased the impact of the 2017 drought.

Noticeable field production was evident in 2017, despite precipitation totals less than one-half of normal. The diverse rotations maintained adequate production on seeded annual crops, while gain per acre on beef grazing annual crops exceeded 2 pounds per day. The improved forage production allowed the center to maintain stocking rates despite the dryness.

Could these management practices be initiated on a larger scale? Would the result be added revenue for producers and a stronger rural economy?

A need exists to develop agro-ecosystems that optimize the balance between forage-based and grain-based crop/livestock systems reflective of the many individual ecosystems. These integrated systems must be synergistic to the native and agronomic plant communities, providing the base for future beef production.

Beef producers need to think “outside the box” and link the components of agricultural management systems with value-added opportunities. Producers need to review high-residue cropping systems, grassland systems and livestock systems that will further define, integrate and refine these systems toward a more sustainable production system.

For instance, at the center, the integration of rotational grazing increased plant-available nitrogen and overall forage production per acre, allowing for increased beef production that can utilize an integrated cropping system prior to marketing beef cattle. Producers who embrace long-term sustainability of beef and cropping systems will see successes emerge within their production environment.

In time, producers will learn that an integrated agricultural system that truly entwines crop, beef and forage production with other managerial practices is beneficial for long-term survival. Only time will tell. Long-term systems research is not easy work for researchers or educators.

Regardless, producers certainly have an opportunity to improve soil, the base from which agriculture stems. In fact, Ralph Waldo Emerson said it best: “He (the farmer) stands close to nature; he obtains from the earth the bread and the meat. The food which was not, he causes to be.”

That connection to the earth, soil, bread and meat, plus other food, is as real today as it was when Emerson wrote his words. Some would say such quotations are old-fashioned and best left to the English teacher to read in class. But that is not true, not true at all. The soil contains all that is needed to generate inputs for the bread and the meat.

Some would say that the soil cannot keep up with the demands of the modern world. So perhaps, at least from a producer standpoint, some effort to rejuvenate soil, to improve its health, to expand its living population of things we fail to comprehend is not a bad idea.

Rain comes from places we do not control. But production is a process producers do control, and the incorporation of production practices that reduce soil disturbance, increase plant diversity, add animal diversity, and maintain living roots to feed soil organisms and cover soil with plants and plant residues is a positive step.

A healthy soil really is a good buffer to our own inadequacies.