BeefTalk: Has the Beef Industry Reached Commercial Thresholds for Performance?

Future improvement in agriculture will be a balancing act.

Losing a calf at birth challenges the beef operation, including the cow and producer.

But, as we know in the cattle business, the cycle of life starts with conception and concludes at death. Our goal is to minimize calf death loss. 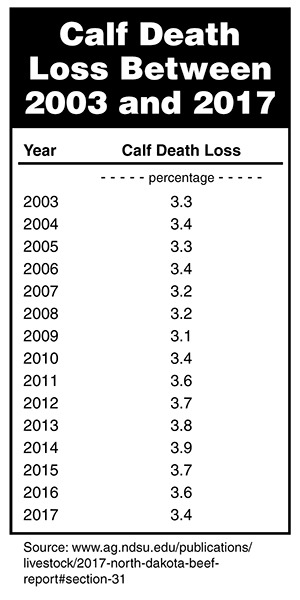 If one reflects on the current benchmark for calf death loss, as well as other benchmark values, one would ponder how changeable the values are. Perhaps the benchmark values for performance traits are indicative of threshold values that commercial beef producers can attain for relative performance within the herd, including growth, reproduction and livability. This concept is in contrast to looking at the trait values as perpetually increasing through selection and management of the cow herd.

Understanding the values is important for gauging input costs, probably more important than selection for an increase in cattle performance. That may seem somewhat negative because goals always seem to encourage a forward, increasing movement of the performance values.

The truth be said, the easy work is done. The increase has been made. The conventional thought often is described as an increase in output. Left in the dust is the question of input costs. Input costs often are noted, but each enterprise determines its own input costs, adjusts the incoming product price and calculates the impact on subsequent profit margin. As long as a margin for profit exists, the green light is generally on.

The beef industry has done well, improving management and genetics, but new challenges keep emerging. Historically, cattle producers have run a straight race and the CHAPS benchmarks reflect industry maturity. But along with maturity, the race track is no longer straight; in fact, it’s more like a maze. Each turn in the maze has more than one outcome.

Interestingly, we do not race in a maze. But still, we prefer an open track with predetermined obstacles.

Back to the discussion of calf death loss. Calf death loss notes the managerial efforts producers have attained in the management of the calving season and subsequent nursing phase for beef calves. Can a 3.4 percent calf death loss rate be improved? Probably, but most likely, the average will not deviate much at the end of the year.

The race is over; the hard work starts as we enter the maze. Future improvement within agriculture – plant and animal – will be a balancing act, weighing inputs and costs against the potential improvement. Inputs, mostly likely starting out as cheap inputs, have been the basis for improvement. As the supply of inputs decreases, the pressure to supply cheaper inputs increases.

The selection pressure for increased yield and growth creates opportunity on the plant and animal side but opportunity that comes at a price. Does it work? Which system is more sustainable, driving for unending production or balance?

In the end, the CHAPS data suggest thresholds have been reached. As a response, one could comment that the benchmarks are only relevant to those who keep records. Then the assumption follows that the rest of the industry does not have the performance level of those herds for which producers keep records.

What does one say? Records are important in the navigation of the industry maze. Producers without records can run the race, but navigating the maze will be difficult.

One always has the option to read what everyone else is doing and simply assume that the data also applies to one’s own individual operation, but those assumptions tend to assume the best. Times change and navigating the maze requires records.