USDA released their January 1 estimates for cattle inventory late last month and I wanted to walk through some of the high points of this report. Beef cow numbers were estimated to have grown by 1.6% from 2017, which is a little less than half the increase that was seen in the prior year. Although growth in the US herd is clearly slowing, beef cow inventory has increased by 9% since 2014. 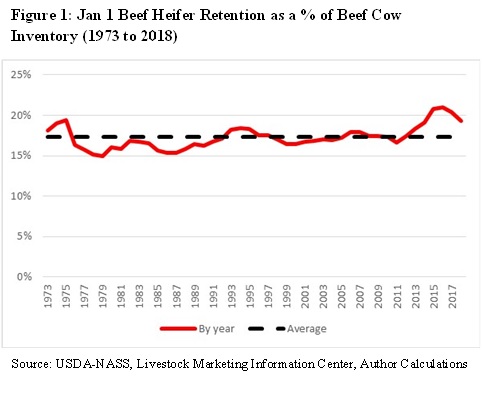 The largest change from 2017 was a 7% increase in the number of cattle on feed. Monthly reports (which survey only large feedlots) had been showing cattle on feed number above year-ago levels since spring, but had shown especially large increases since fall. Part of this is due to the size of the calf crop, which was 2% larger in 2017, but I think a larger issue involves winter grazing.

The annual inventory report also includes an estimate of cattle grazing small grain pasture on January 1st in Kansas, Oklahoma, and Texas. This estimate serves as a gauge of winter grazing, which has a significant impact on late fall and winter calf markets. USDA estimated a 13% decrease in the number of cattle grazing small grains this January as compared to 2017. I had an opportunity to visit with some of my colleagues in Texas and Oklahoma last week and they confirmed that fewer cattle were placed into winter grazing programs this year and some that were placed had to be sold early due to weather challenges. This would suggest that in addition to the larger calf crop, more light cattle were placed directly on feed this winter. Cattle placed on feed at lighter weights will tend to be on feed longer and finish at slightly lower weights.

Still, the combination of growing cattle on feed inventories and relatively inexpensive feed, should translate into a sizeable increase in beef production for 2018. Increases are also expected for both pork and poultry. This growing supply of meat will be the largest challenge for the beef sector in 2018.

The USDA report is summarized in table 1 and the full report can be accessed at: http://usda.mannlib.cornell.edu/usda/current/Catt/Catt-01-31-2018.pdf