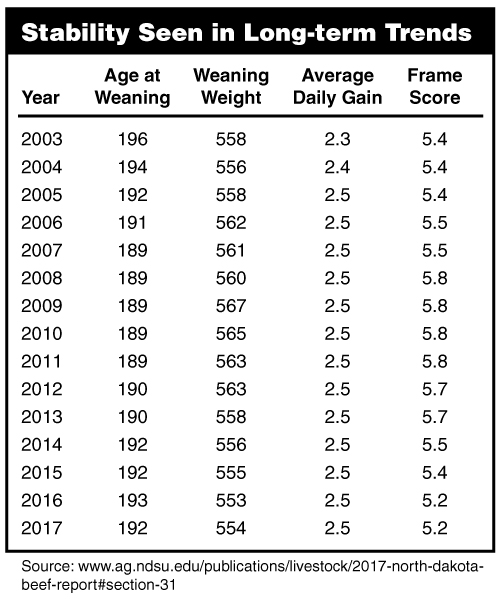 The current growth benchmark for actual weaning weight is 554 pounds at 192 days of age, with an average daily gain of 2.5 pounds.

The North Dakota State University Extension Service and North Dakota Beef Cattle Improvement Association (NDBCIA) collect and analyze the CHAPS data to produce meaningful annual benchmarks. The current growth benchmark for actual weaning weight is 554 pounds at 192 days of age, with an average daily gain of 2.5 pounds. These calves are a 5.2 frame score.

The NDBCIA uses the CHAPS program to calculate five-year rolling benchmark values for average herd performance, which have been quite consistent. Let’s look closer at the average actual weaning weight benchmark.

Perhaps the commercial beef cattle business could be called mature, at least for growth on the cow-calf side of the business.

A producer needs to decide what level of performance is expected and how much one is willing to expend to get that performance. Performance is really herd output, a function of age and growth. The benchmarks provide a tool for herd evaluation, a review of growth annual trends and a number on which to base future goals for the operation.

Historical marketing brings comfort to established cow-calf programs, but – yes, there is a “but.” Historical marketing programs apparently do not allow for expression and payback for the growth potential that is hidden within the phenotypes of the calves brought for sale.

Ironically, the heifer mates to these cattle are retained at the home place. The heifers grow into cows and their mature weight naturally would be similar only to the steers that were sent to the feedlot.

They have gotten bigger. So producers face some challenges: growth genetics that are not being captured as the progeny are marketed and subsequent larger mother cows that cost more to keep. The real answer to the management of growth genetics needs to return to where it started, which is sound breeding systems combined with more flexibility in the marketing of the offspring.

Historically, breeding systems were intended to allow producers to maintain the most efficient maternal cow at home, purchase good terminal-type sires and produce a terminal offspring that was intended for the feed yard. At some point, another breeding system would be utilized to produce the replacement maternal cow; thus, the best of both worlds.