Beef demand is key to a strong market finish

There’s a tug of war going on right now in the beef market. Big supply is tugging one direction, while seemingly strong demand is tugging the other way. Fortunately, the demand team currently has the advantage.

That said, October proved to be another favorable month for fed and feeder cattle prices. The fed market advanced $14 per cwt over the course of four weeks – nearly all of that happening in the last half of October. The fed market began the month trading mostly $109-110. Meanwhile, October closed out business with back-to-back weeks of big gains and finished the month at $123-124.

Even more favorably, those gains came on the back of big kills. Beef production during the past several months has been running about 3% ahead of last year’s pace. Weekly production averages are now back to levels not seen since 2010. And meanwhile, the fed market stands about $20 per cwt better versus the same week in 2016 (Figure 1). 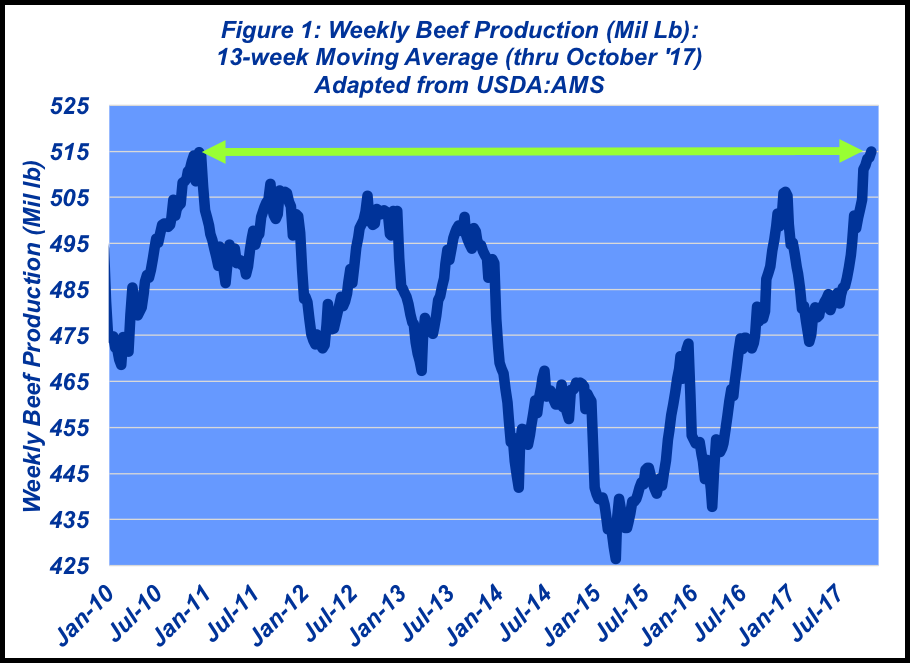 Perhaps most important are the market dynamics as we look out into the spring. Seemingly, 2017 looks to be setting up to potentially repeat last year’s pattern (Figure 2). That is, the market finds a bottom – and the very next week, fed trade is on its way to plowing new ground to the upside.

That’s an important development. Typically, markets find a bottom and then either consolidate around that level or recover with subsequent retesting of the previous low. But that didn’t happen last fall. Rather, demand kicked in and took the market to unexpected levels. The extended rally caught everyone by surprise.

To that end, since marking the $104-105 low in September, the fed market thus far seems to be enjoying the good fortune of a solid rebound. Where we go from here remains to be seen. Clearly, cattle feeders are hoping for complete follow through like last year. Nevertheless, the foundation behind the recent rally is important.

First, the economy is managing to find some footing. That spells better strength on the part of the consumer. Domestic consumers seem to be fairly comfortable with the current environment, as indicated by consumer confidence measures. Much of that stems from better economic growth, lower unemployment and spill-over wealth effect driven by gains in the equity markets. As long as those factors can stay intact – and it appears they will for at least the next 6-to-9 months – beef may be able to enjoy its pricing power.

And beef spending is working favorably for the industry. As mentioned previously, beef production is surging. However, beef has been able to maintain pricing power as indicated by recent retail meat data (see this week’s Industry At A Glance). In other words, despite increased tonnage, beef has been able to maintain price premiums versus pork and poultry.

Second, international demand has also been humming along. Global AgriTrends explains it like this:

Everything on the demand side is favorable, and noted previously, the demand bulls have the upper hand – at least for now. However, despite an early pattern that’s similar to last year, that shouldn’t serve as an opening for complacency. As noted above, big supply is also tugging on the rope and creates potential for the market to slip along the way. 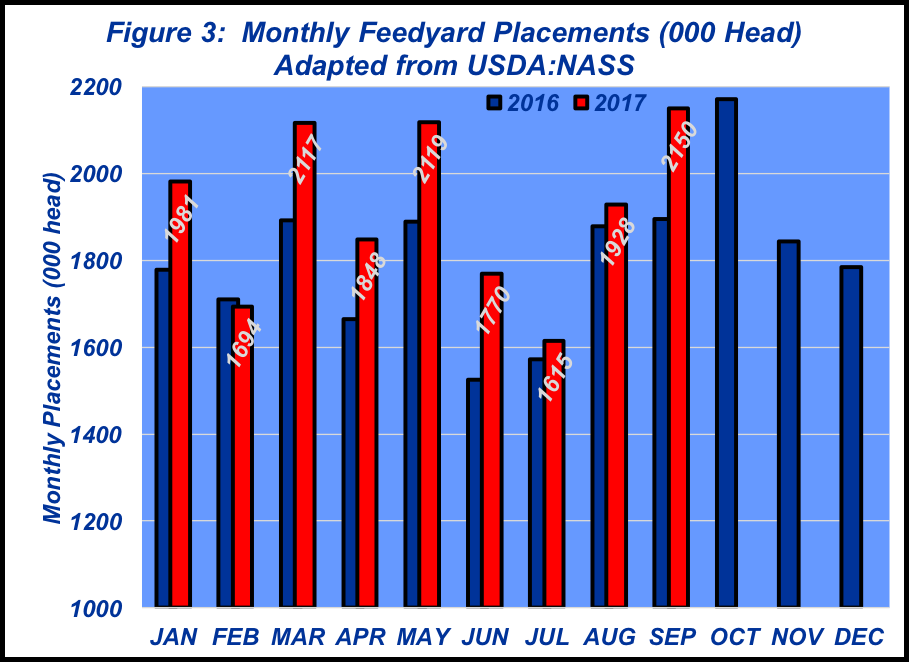 Big placements have been a recurring theme throughout 2017 (Figure 3) and in the absence of an active beef market could catch up to the market. In other words, while we’ve been successful managing bigger numbers up until now, the pipeline is full.

Therefore, the pressure to keep that pace up will continue. As such, feedyard managers need to remain aggressive about marketing cattle to prevent getting backed up.

None of that is a new theme. It’s something I’ve touched on each of the past several months. To restate the pressure a little different way, the logic is: In aggregate, placements during the past six months (April, May, June, July, August, September) totaled just slightly over 1 million addition head versus 2016. Therefore, feedyards need to market that additional inventory through the fall, and into spring 2018.

The equivalent being that weekly marketings need to run roughly 40,000 head bigger versus last year’s pace. So far in 2017, the industry has managed to work through cattle in good order. But it underscores the importance of beef demand and continuation of large weekly kills.

The rally of late is an important development. It’s important to recognize that opening in the market is a favorable one – and could potentially close fairly quickly. Therefore, it provides a good opportunity to, at the very least, make some sales at this level if that hasn’t occurred.  Moreover, it’s pulled feeder cattle higher, too – creating new prospects to price cattle in the current fall run.

All that said, the market’s recent surge underscores the importance of managing both market and business risk on an ongoing basis. This column always concludes by encouraging reads to remain vigilant about monitoring the business environment. That endeavor helps to ensure the likelihood of making favorable decisions going forward. 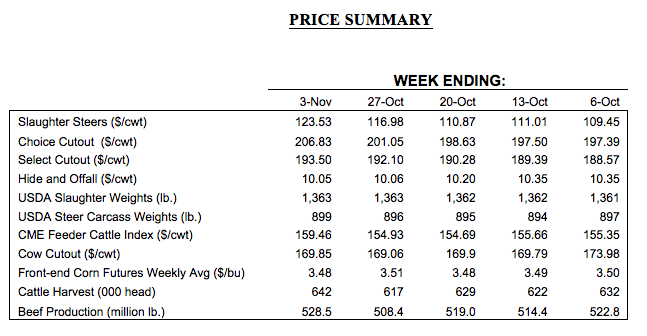