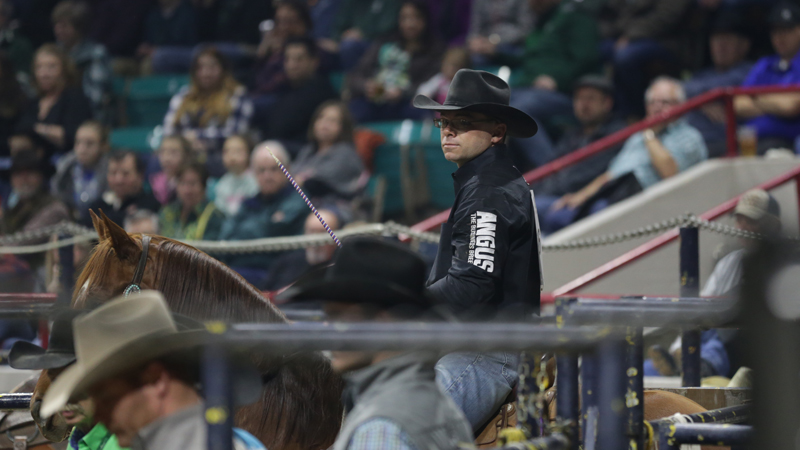 As Matt Reeves stepped into AT&T Stadium after a late-night drive from San Antonio to Dallas, thoughts of anticipation and excitement ran through his mind. The American Angus Association® sponsored steer wrestler qualified for RFD-TV’s The American, and on February 25, he took home top honors and split the $1 million payout after competing in Dallas.

The third steer wrestler of the final four to run, Reeves was up against some of the fiercest competition on the “pay dirt” in all of American rodeo. Despite the competition, the screams of the crowd or the pressure of the paycheck, Reeves and his horse Roy were focused on the steer in front of them. Reeves’ skill and Roy’s speed led the pair to a 3.73-second time and a $433,000 check at the richest single-day event in rodeo history.

“Winning The American will be great for myself and my family,” Reeves said. “It gives us a chance to pay off our home and buy more Angus cows. Having those things taken care of will allow me to continue to rodeo with less stress.”

What makes The American such a tough competition? The event invites the top athletes from across the 2017 world standings to compete against underdogs who advance from The American semi-finals. If a nationally ranked athlete wins his or her respective competition, the prize is $100,000. But if a qualifier from the semi-finals or an athlete who earned an exemption wins, the contestant shares in a $1 million bonus pool. Reeves split the pool with three other qualifying winners and took home a check of a lifetime.

Reeves, a commercial cattleman and Angus breeder, is a seasoned veteran of the rodeo scene. He’s competed in numerous rodeos in his more than 10-year tenure, qualifying for the Wrangler National Finals Rodeo (WNFR) six times in his career.

“Matt’s integrity, determination and perseverance make him an excellent representation of the American Angus Association and its membership,” Association CEO Allen Moczygemba said. “We are extremely proud to support him and look forward to watching him continue to compete across the country.”