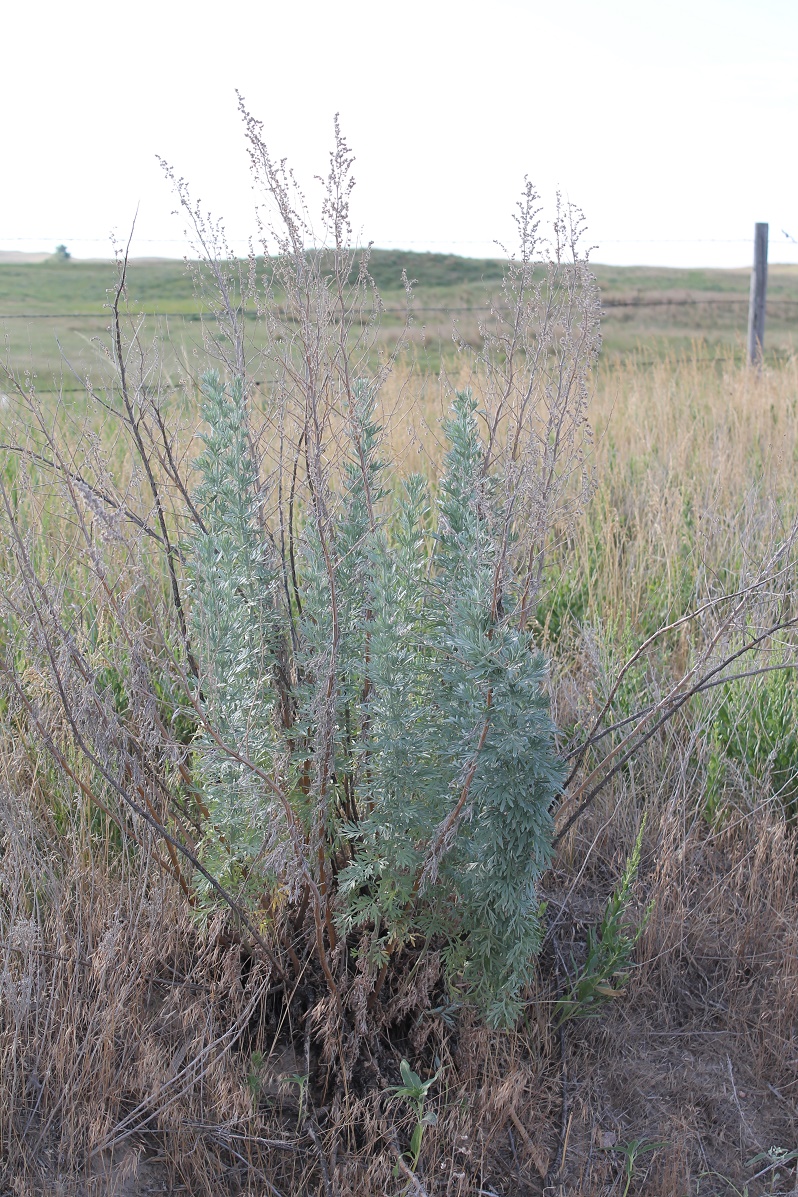 Absinth wormwood takes over through its massive seed production (up to 50,000 seeds per stem). These seeds can sit in the soil for up to 4 years, waiting for the right conditions to sprout. Absinth wormwood can also reproduce through short runners, or rhizomes.

WHERE DID ABSINTH WORMWOOD COME FROM?
Originating in North Africa, Europe, and Asia, states such as Colorado and the Dakotas have been trying to control absinth wormwood for years. During the drought of 2012, many Nebraska ranches received hay contaminated with absinth wormwood seed purchased from the Dakotas. Highway and county roadside ditches were also infected, as the seed spread during transportation of the hay.

HOW TO IDENTIFY ABSINTH WORMWOOD
Absinth wormwood is a perennial plant (Figure 1: https://go.unl.edu/e5gc), composed of several woody stems, silver leaves, and a taproot, according to Kristi Paul, Sheridan County Weed Superintendent. The leaves have a strong offensive sage odor. The leaves are covered in gray/silver hairs (Figure 2: https://go.unl.edu/yv62). The plant can grow up to 5 feet tall when mature, and has inconspicous dull yellow flowers that bloom July through August. Control is encouraged before the prolific seed production, so June is a good time to apply herbicides.

There are several beneficial native forbs that can be confused with absinth wormwood. Cudweed sagewort, silky prairie clover, sand sagewort, Texas croton, silverleaf scurfpea, pussytoes, and leadplant have gray/silver leaf color, but are native and not a threat to rangelands.

CONTROL METHODS
If you have identified absinth wormwood, but only have a couple plants, you can hand pull or dig, making sure to pull all the roots, preferably before the absinth wormwood develops seeds. Go back every year in late May or early June, to dig any new sprouts that appear.

If rangeland is contaminated with absinth wormwood, chemical control may be a better option. Several herbicides are available, but read the label to ensure the site to be sprayed is allowed. The absinth wormwood plant should be at least 12 inches tall and actively growing before spraying. The more mature the plant, the more difficult it is to control with herbicide. Mid-June to August is a good time to scout plants and begin herbicide treatment. Due to the fine hairs, include a spreader/sticker with the herbicide.

Herbicides used include: Milestone, 2,4-D, glyphosate, dicambia, picloram, and clopyralid. Read, understand, and follow all label instructions when using a pesticide. Include a spreader/sticker with the herbicide mixture, or the chemical will not be able to penetrate the leaf hairs.

Absinth wormwood will quickly grow and spread, so it is important to learn how to identify the plants, begin control measures immediately, and hope absinth wormwood can be controlled before it gets a chance to spread across Nebraska.