This column has previously highlighted the importance of the beef cow slaughter rate to next year’s beef cow inventory. Based on data between 1987 and 2016, the equilibrium slaughter rate runs around 9.3%. In other words, bigger slaughter, as a percentage of the cowherd, means a smaller cowherd in the following year, while a rate slower than 9.3% spells likely expansion. The data are fairly reliable with only a few outliers (1993, 2015 and 2016).

Within that analysis, it’s important to monitor slaughter rate on a quarterly basis. That enables us to look ahead to January 1 with some sense of certainty about net changes in cow inventory through the year. Accordingly, this week’s data reflects two items.

First, the average monthly beef cow slaughter rate during the previous 30 years is applied to the 2017. For example, the average January slaughter rate in the previous 30 years has run right around 0.82%; the respective monthly averages are subsequently applied to the 2017 annual base. The annual total – 2.91 million – is equivalent to 9.3% of the 2017 starting inventory.

Related: 9 Things To Consider Before Culling A Cow 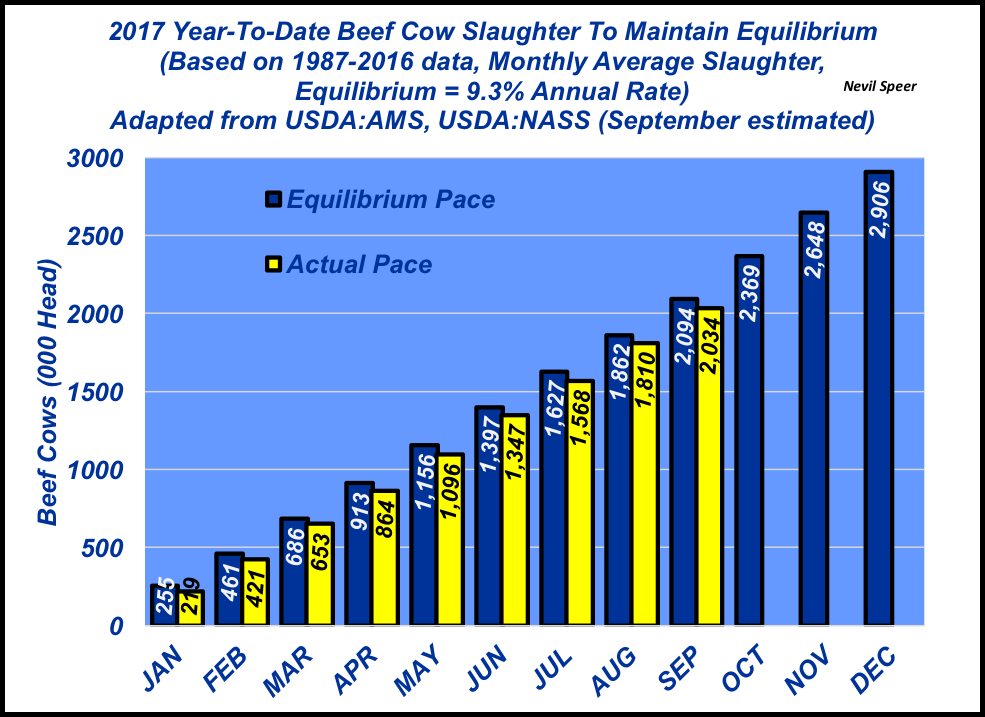 Thus far, it appears beef producers have indeed reached somewhat of an equilibrium point in terms of cow inventory; growth is occurring, albeit at a very tepid rate. As such, it’s likely we’ll end up with a January 1, 2018 inventory similar to slightly larger compared with 2017.

What’s your plan for fall cow slaughter?  How do you perceive this trend playing out during the last three months of the year? Leave your thoughts in the comment section below.