Udder Quality in Beef Cows – Does it Matter? 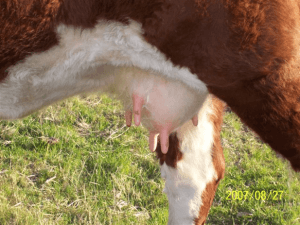 Udder and teat quality are two of the most important functional traits for a beef cow. Although much of the focus in selection of female replacements is on milk production, the milk delivery system (udder and teats) is equally important. It is easy to see that newborn calves have a difficult time nursing oversized teats, especially if hanging very close to the ground, which often results in inadequate colostrum intake. However, there is limited research regarding the occurrence of mastitis in beef cattle and its associated effects. “Mastitis” is infection (usually bacterial) of the milk-producing tissue or “mammary gland”. A cow with a case of mastitis will typically have one or more affected quarters that are swollen and produce abnormal milk. The milk may be thick with clots, thin and watery, or may not look unusual depending on the infecting bacteria. Some cows exhibit signs of illness such as fever and anorexia (off feed) while others show no outward signs. Her calf may become weak and lethargic because of hunger since cows with mastitis do not produce much milk in the unaffected quarters. Once the infection is over, the quarter is usually damaged and produces much less milk (a light quarter) or dries up completely (a blind or dry quarter-see photo 1) for the rest of the cow’s life. Milk production in beef cows is the most important factor affecting calf pre-weaning growth and subsequent body weight at weaning. In fact, each additional pound of milk produced per day may increase calf pre-weaning weight 15 to 30 pounds. At a current market price of $1.60 per pound for 400- to 500-lb beef calves, producers may be losing $25-$40 or more per head due to the presence of mastitis in their dams, which reduces milk production and milk quality (Figure 1).

While beef heifers are most susceptible to mastitis in the summer due to horn flies biting the teat ends and introducing bacteria, adult beef cows are prone to mastitis infections when milk remains in the quarter that a calf is unable to suckle, either because the teat is too large or the teats are too close to the ground. A recent study found cows with large funnel-shaped teats, pendulous (low-hanging) udders, and cows with blind quarters are at highest risk for mastitis, especially in dirty environmental conditions. One of the most effective methods to reduce the risk of udder health problems within a herd is by culling cows with poor teat and udder conformation. On the positive side, udder and teat characteristics are heritable so improvements can be made through proper genetic selection.

Udder scores in beef cattle are considered to be moderately heritable. Two scores are typically taken on beef cows, suspension and teat size. The heritability for suspension is .32 and .28 for teat size. What these values tell us is that females with good, or bad, udders tend to pass that trait to their daughters. From a practical standpoint in your herd, if you have a cow that has an undesirable udder it might not be economically feasible to cull her, but you would definitely want to avoid retaining her daughters as replacements. However, if the udder quality is so poor that it affects the calf’s ability to nurse resulting in reduced performance, culling may be your best option. Also, when purchasing your herd bulls that you intend to retain daughters from, it is a good idea to take a look at his dam and assess her udder quality. In this case it is not necessary to be too selective, but you want to avoid a bull from a dam that has extremely poor udder quality. Of course there is less relationship between a replacement heifer and her grand-dam than between her and her dam.

To date, the American Hereford Association is the only breed to provide Expected Progeny Differences for udder scores which enhances a commercial cattleman’s ability to select bulls that will pass on these qualities to his daughters. For more information on Hereford’s udder quality EPDs please see their fact sheet “Udder Scoring“: https://hereford.org/wp-content/uploads/2017/02/udderscoringfactsheet.pdf. Other breeds will likely follow with udder EPDs in the future. 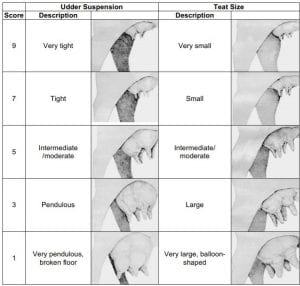 In July 2008, the Beef Improvement Federation (BIF) adopted a two-score system for evaluating udders (see Figure 2). With this system, producers score both teat size and udder suspension and scores for both characteristics range from 1 to 9. The best time to score is within 24 hours of calving and should be performed by the same person throughout the calving season for consistency.

Teat size is scored from 9 (Very Small) to 1 (Very Large, balloon shaped) on the worst teat and size includes both teat length and circumference. Generally, teats of intermediate length, symmetrical and more centrally located on the quarter are desired. The teats that score from 1 to 3 are long, appear thick, are usually large and funnel or pear-shaped and often hang below the hock. These low scoring teats are difficult for a newborn calf to find, attach, and suckle. Intervention is usually required at calving for the calf to receive colostrum and the cow is at high risk for mastitis.

Udder suspension- Scores range from 9 (Very Tight) to 1 (Very Pendulous) and are actually assessments of her udder support. An udder suspension score of 9 means the udder is high and tight to the body, well above the hocks, with quarters mostly level from the side and rear views. On the other extreme, an udder suspension score of 1 is given when the floor of the udder is below the hocks, the quarters are not level and teats are not perpendicular to the ground when filled with milk. Again, intervention is required at calving for the calf to receive colostrum because of the difficulty of nursing. 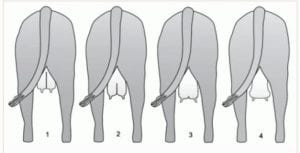 Milk production in beef cows is one of the most important factors affecting calf pre-weaning growth and subsequent body weight at weaning. Mastitis will result in decreased milk production, reduced calf weaning weights, and lifelong damage to the quarter. Adult beef cows with large funnel-shaped teats, pendulous (low-hanging) udders, and cows with blind quarters are at highest risk for mastitis, especially in wet and muddy conditions. Culling these cows with poor teat and udder conformation and selecting replacements with better udder traits will make a noticeable difference in calf performance.

For further information, the BIF scoring system is described in a fact sheet written by Dr. Rick Rasby at the University of Nebraska-Lincoln entitled “A Guide to Udder and Teat Scoring Beef Cows” available at the following website: https://beef.unl.edu/learning/udder_score.shtml.