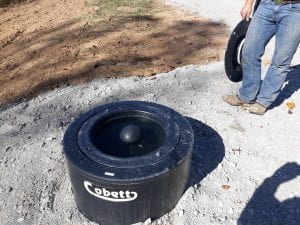 Would placing water in strategic locations improve your pasture management?

Well, the growing season may be over but the grazing season may not. My whole career I have heard many talking about how long the grazing rotation should be: maybe 14 days in the spring or 60 in late summer during dry weather. I have also heard the discussion over which is more of a management challenge. Over 30 years ago I heard someone say that the greatest challenge is the 150 plus day rotation during the winter months. That one took me a while to process but once I did, it made a lot of sense. Few have accomplished it and many have made it a long way. I really don’t think of it as whether you succeed at it but if you can get better at it. The greatest cost of keeping grazing livestock is stored feed, and if we can reduce how many days we feed, we will be better off. You may not make the rotation last 150 days, but can you make it last longer, say 90 days? Every day I am not feeding hay means a day I am not spending as much money or time feeding livestock. This is a good time to try to plan ways to reduce the days you feed hay next year or better yet even this year. Is there a hay field you can still graze without causing damage to it? Is there a harvested corn field you could graze? Little things could save.

During the summer, did you have any issues you could address to reduce issues next year? I noticed a lot more cocklebur in the pastures this year and mowing simply will not eliminate this weed. I have seen two inch high cocklebur with seeds on it. Spraying next year seems to be my best option. 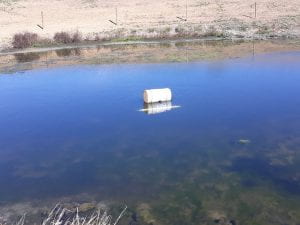 Water drawn from 18 inches below a float can be gravity fed to buried, non-electric, insulated tank like seen above.

It was very dry later in the summer. Was water an issue? If so, now is the time to plan. My neighbor had issues and he rebuilt his pond, then put a barrel sized insulated tank buried about 80% in the ground with a float and valve on it that is gravity fed from the pond and requires no electric. It looks impressive and is unlikely to freeze. If it gets very cold this winter, do you have a plan to provide water? Over the years there have been several times I had to break ice when it remained below zero for extended periods of time.

If there is a dry day or two in the next few weeks, can you move out some round bales of hay to feed later in the season before it gets too muddy? Do you have enough feed for the winter? Hay is likely less expensive now than it will be in late February. Keep in mind that a portion of a hay diet can be replaced with corn. A pound of corn typically provides the energy of two pounds of hay. Shelled corn with the kernel cracked into three to four pieces maximizes utilization, but I get better intake using whole kernels when I feed it directly on the ground.

On, at best, a loosely related note but I consider a very important one, we worked all of the cattle the first of November. About half of my paddocks are on one side of the farm and about half are on the other. When we finally put in working facilities several years ago, we placed gates on each end of the holding pen and when I move cattle, I put them in the pen, close one gate, walk down and open the other, and out they go. When I need to work cattle, I set it up the pasture rotation so the cattle think it is time to be moved and it is a one person operation. I can then sort them into a sub-pen, then into the tub, down the alleyway and to the chute. It is so much safer and the cattle stay completely calm. The facilities are probably the best money I ever spent on the farm and I can now A.I. cows and treat animals when needed and most importantly, stay safe.