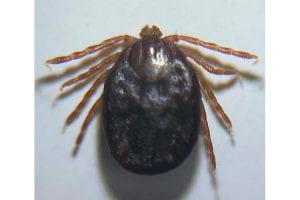 My colleague Erika Lyon wrote a great article in the January 24th, 2019 All About Grazing column in Farm and Dairy (link) that discussed the invasive Asian longhorned Tick. I want to give an update on where that tick is now, where its new host range is located, and what potential disease problems to look out for.

The Asian longhorned tick is native to East Asia as well as Australia and New Zealand.  It had not previously been found in the United States prior to its discovery on a farm in New Jersey in the fall of 2017.  This tick is a major concern as it reproduces via parthenogenesis, which means that the female does not need a male in order to reproduce, she can start laying eggs, which are genetic clones, that can overwhelm the host in very large numbers. It has been found on humans, companion animals including cats, dogs and horses, livestock species including chickens, cattle, sheep and goats and multiple other mammals and birds including foxes, bears, geese, deer, raccoons, skunks, hawks, groundhogs and opossum (which are known to consume ticks as food).

A single female that hitches a ride on a Canada goose can start a new population a flying distance away.  There were two concerns regarding this tick that have since been confirmed with one being what type of range would the tick colonize in the United States and the second being would this tick be able to transmit any of the diseases that exist in our local host range to producers, livestock or companion animals.

In the January 24th article, the tick had been found in eight states and since that time it has expanded its range and has been positively identified in 13 states including Virginia, New Jersey, North Carolina, Tennessee, Maryland, Delaware, Arkansas, Connecticut plus four states that border Ohio including New York, West Virginia, Pennsylvania and Kentucky.  As of the June 15th publication of the United States Department of Agriculture’s National Haemaphysalis longicornus (Asian longhorned tick) Situation Report, there were no confirmed reports of the tick found in Ohio.  Many researchers and educators feel it may be here already or it is only a matter of time until it crosses the Ohio river.

Taking a look at our two major questions we find some disturbing news. In evaluating how far this tick will spread the research compares the tick’s native environment in East Asian to our habitat in America. An article published in the December 13th, 2018 Journal of Medical Entomology by author Ilia Rochlin (link) modeled the potential habitat reach for the Asian longhorned tick and found that it has a very similar habitat range to the American Dog Tick (Dermacentor variabilis) which encompasses the eastern half of the United States as well as the coastal western United States from northern California to Canada. The second concern for this tick was regarding its ability to vector disease was answered recently when the tick was implicated in the spread of the protozoan parasite Theileria in cattle in Virginia.  Theileriosis is a disease in cattle that is similar to the disease malaria that infects humans. Experimentally the Asian longhorned tick has shown in laboratory studies to transmit Rocky Mountain Spotted Fever which indicates that much more research needs to be done.

I highly recommend that all producers read Erika Lyon’s January 24th 2019 Farm and Dairy All About Grazing article to familiarize themselves more with this tick, its identification and how to keep yourself, your families, your companion animals and your livestock tick safe and healthy. OSU Extension will continue to keep you up to date on the spread of this new invasive tick and the potential it has to spread disease.

EDITOR’s NOTE: On July 31, 2020, shortly after this article was authored, the Ohio Department of Agriculture confirmed that an Asian longhorned tick had been found in Ohio’s Gallia County. Find that ODA release in it’s entirety linked here.