Today, as we sit here on May 15, we know three things for certain: 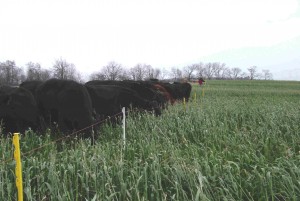 Grazing oats planted on Prevented Planting acres in very late fall is an excellent alternative for harvesting this cover crop.

Today, insured corn and soybean growers throughout Ohio find themselves at the crossroads of a decision that pits the overwhelming desire to want to plant and grow a crop against the reality that financially and agronomically it might be a more sound alternative to accept a Prevented Planting insurance payment. Adding further support to the notion that today one might be better off not planting the corn or soybean crop is the opportunity to plant a ‘cover crop’ in those insured but unplanted acres and utilize it for cattle feed late this fall.

Let’s start at the beginning. To an insured crop producer, what is Prevented Planting?

RMA says “Prevented Planting is a failure to plant an insured crop with the proper equipment by the final planting date designated in the insurance policy’s Special Provisions or during the late planting period, if applicable.” The most common cause for the failure to plant a crop in a timely fashion is adverse weather. An insured producer in Ohio can elect to receive a Prevented Planting payment for corn on June 6th and/or June 21st  on soybeans if adverse weather has prevented the crop from being planted by then.

You may ask why I’m discussing this in a beef cattle publication. Once the decision to apply for Prevented Planting (PP) has been made, cover crops – including those a cow can eat – may be planted on those PP acres and grazed or harvested without affecting the PP payment beginning November 1. It may take some creativity to turn cover crops into feed beginning November 1, but considering that inventory of quality hay in Ohio is so low right now, it merits consideration.

Before we go further, if you’re considering planting a cover crop that you might harvest for forage on PP acres, check with your crop insurance agent and Farm Service Agency for any restrictions you might need to consider.

While there are a variety of cover crops that might be planted and make feed yet by fall, I suggest spring oats be considered as a viable, affordable and productive alternative. Not only are there plenty of jobs on the farm aside from planting cover crops that need immediate attention, soil conditions across much of Ohio remain too wet for planting them today, most fields are plagued with weeds that have yet to be controlled, and in many cases fields are still rutted from last fall’s harvest. And, if forage and not grain is the goal, plenty of time remains to get oats planted.

Over the years we’ve found it’s not important to rush to get spring oats planted in order to grow lots of high quality feed late in the summer. In fact our experience has been that we get a greater yield and higher quality feed if we wait until the end of July or early August to plant oats for forage. Without getting into a science lesson, it seems that the oats prefer the cooler average daily temperatures we typically experience beginning in August, and they are more likely to not push out a seed head, but remain vegetative until extremely cold temperatures shut them down completely sometime in December.

Not only does an August 1 planting date seem to offer more yield and higher quality oats, but it will also allow ample time for fields to dry, ruts from last fall to be repaired, manure to be hauled, and weeds to be controlled. Based on our experience beginning in 2002 in Fairfield County with oats planted mid to late summer, if you can utilize a forage for grazing, baled hay, or silage late this fall or early winter, oats appear to be the most productive, highest quality, least cost alternative available to Ohio livestock producers for planting during the summer months. In fact with some timely rainfall, when planted most any time before late August, there’s an opportunity to ‘create’ on a dry matter basis anywhere from two to five tons of forage while investing little more than the cost of 80-100 pounds of oats and 40 pounds of nitrogen.

Based on experiences with summer planted oats, Curt Stivison, who initiated this work in Ohio, and I offer these suggestions:

* Optimum planting date for oats from the perspective of yield is not until the first of August. Early August plantings also have resulted in the highest total amount of TDN produced per acre. Later plantings will be slightly higher in quality, but typically not enough so to offset the yield advantage of an August 1 planting. While being more conducive to a mechanical harvest in early Fall, planting in early to mid July reduces both yield and quality. The earlier oat plantings also have exhibited more susceptibility to rust.

* Regardless the planting date, or variety, no-tilled seeding rates of from 80 to 100 pounds of oats have consistently resulted in optimum forage yields.

* Optimum nitrogen application rate has been 40 to 50 pounds per acre. This application not only produces the highest yields, but at current values of nitrogen, it’s also the most cost effective rate. Higher rates of nitrogen actually depressed yields in our 2008 plots.

* Over the years, many growers have been successful using bin run ‘feed’ oats originating in Canada. Most of the concerns with utilizing ‘feed’ oats are obvious: no germination test, and the potential for bringing some weed seed onto the farm. Another problem we experienced once was that a few of the Canadian oats in the “feed bin” were apparently winter oats. After getting started in the fall, they went dormant over winter, and then elongated in the spring much like winter wheat does after breaking dormancy.

* The optimum combination of productivity and quality of August planted oats arrives 60 to 75 days after planting. Apparently due to the heat, oats planted in July mature more quickly and thus, rapidly decline in quality beginning 50 to 60 days after planting in most years.

* Oats harvested 50-60 days after planting and while still in the boot stage of maturity may offer some regrowth that could be grazed.

* A weed control application of glyphosate is a necessary and cost effective practice prior to oat planting.

An additional advantage observed when using oats for an annual forage crop is the opportunity to capture the total tonnage produced with a single cutting harvest if grazing is not an option. Crops that require multiple mechanical harvests increase costs of production significantly.

As oat forage harvest options typically beginning November 1 are considered, grazing provides the most effective and affordable alternative. In 2002, locally one family strip grazed oats all winter and actually began the calving season on them before the oats ran out in mid March.

Dry baling oats in the fall has been done around Ohio, but it’s a challenge considering that oats will dry less than half as fast a grass hay. Cut in November, oat typically require at least two weeks or more to cure. Wet wrapping them is an expensive alternative. Using an in-line bale wrapper/tuber is a little less expensive per ton than individually wrapped bales if the equipment is available locally.

Oats won’t die until temperatures have been in the mid 20’s for several hours. That means they’ll still be green and alive in December most years in Ohio. When they finally freeze, and if it’s not a wet winter, growers may be able to let them die and dry while standing, get a few days of dry frozen weather in January, mow them, rake them and quickly bale them after they’ve essentially cured standing.

In Canada, growers have sprayed their oats with glyphosate and let them dry out while standing. Then, after a few weeks and at a time when they get a dry week, they mow, rake and bale them all in a day or two. Locally, that’s been done once that I know of which allowed the oats to be baled in late December and January.

If grazing the standing oats is not an opportunity, perhaps chopping and ensiling oats is the best alternative for harvest. This offers several advantages over baling or wet wrapping. Obviously the issue of curing the plants for dry harvest becomes a moot point. Chopping and ensiling into either a permanent structure or bags is also likely less expensive than wet wrapping individual bales. Perhaps even better, as detailed by Francis Fluharty a few years ago, chopped forages are 30 to 60% more digestible than long stem forages.

Admittedly chopping and ensiling is likely more expensive than rolling dry hay, but when you consider you get essentially no storage losses, the timeliness of harvest which is afforded, and the more digestible feed which results, it’s a good alternative. And if you’re able to bunk feed the chopped and ensiled oats, there will be no “bale ring” feeding losses to be experienced.

Keep in mind, if you plan to accept a full Prevented Planting Crop Insurance payment, cover crops can’t be harvested or grazed until November 1.

During the winter of 2013 Ohio Forage and Grassland Council Annual Meeting, I was invited to share the following presentation, which includes a number of photos, about our past experience of growing oats late in the summer for forage. Oats, planted late in the summer are indeed, a consistently productive and high quality forage alternative!