Johne’s (pronounced Yo-knees) Disease is a chronic, fatal disease characterized by profuse, watery diarrhea and weight loss or “wasting” in adult cattle (see Figure 1). Although it is a disease of mature animals, the infection most often begins when newborn calves nurse manure-covered teats contaminated with the bacterium Mycobacterium avium subsp. paratuberculosis, commonly referred to as “MAP”. The major problem with MAP infection in cattle is that the disease remains hidden because diarrhea and weight loss do not develop until 2-7 years after infection. However, the infected animal will release or “shed” the bacteria during this “silent phase”, contaminating the environment and allowing more calves to become infected. (For more information about Johne’s Disease, see last week’s article: Johne’s Disease and Detection in Beef Cattle – Part I, Frequently Asked Questions). Control of the disease is based on three basic steps: 1) identify and cull MAP-infected cattle; 2) prevent exposure of young, susceptible calves to the bacteria; and 3) prevent entry of infected animals into the herd. 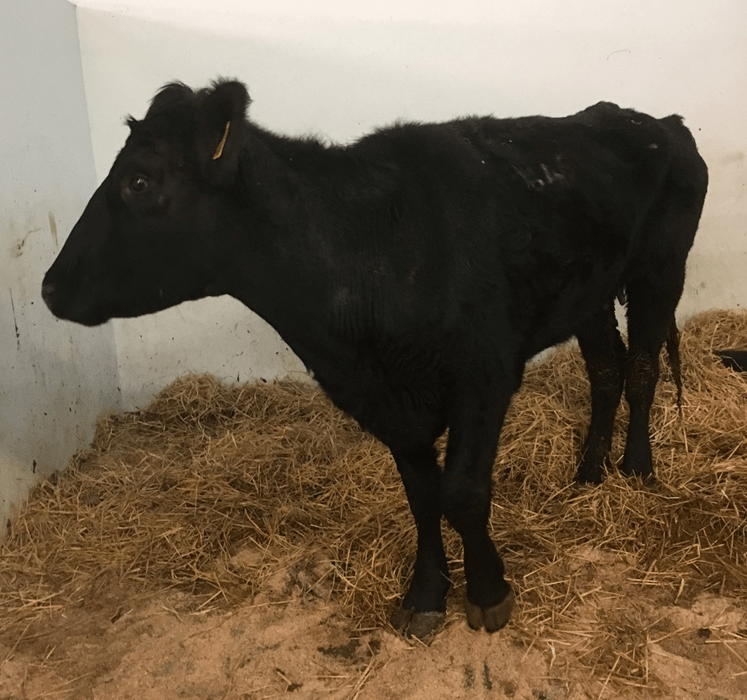 What is the best way to proceed after learning Johne’s disease is in the herd? Once a diagnosis of Johne’s disease is made, it is important to understand that for every clinical (sick) cow with Johne’s in a herd, there may be 10-20 more who are infected but not yet showing signs (subclinical) because of the long (2-7 year) incubation period. The first step is to work with a veterinarian to devise a plan of attack to find MAP-infected cattle based on the goals for the cattle operation. If selling seed stock, the goal should be to classify as test-negative or work towards it as quickly as possible. Commercial operations may opt to reduce the infected animals in the herd gradually through testing and management. Remember that herd testing is done on healthy-appearing animals so decisions should be made in advance on how a positive result will be handled. If no changes will be instituted, then testing is a waste of time and money.

What tests are available to detect animals infected with MAP bacteria before they develop diarrhea and weight loss? There are basically two options for testing: 1) MAP bacteria detection in feces and 2) antibody detection in blood (serum) or milk. Typically, antibodies in blood are produced by the infected animal after shedding of the bacteria in the feces begins so fecal tests will be positive earlier than blood tests. Both tests become more accurate as the disease progresses towards the clinical stage of diarrhea and weight loss.

At what age should testing begin? Due to the biology of MAP infection, only adult cattle (18 months and older) produce the targets needed by diagnostic tests. Although calves are infected while very young, they rarely release/shed the bacteria in feces, nor do they produce antibody at a young age. It is recommended that diagnostic tests be used in animals at least 18 months old and generally recommend testing to begin after 2 years of age.

What is the recommended herd testing approach for seed stock operators? Seed stock operators or any farming enterprise selling livestock for breeding (including farms that sell replacement heifers) are strongly encouraged to enter a rigorous testing program to eradicate the disease if Johne’s has been identified. MAP-infected cattle are not suitable as breeding livestock because they will have a shortened herd life and will likely transmit the disease to the buyer’s herd. The recommended approach is to submit individual fecal samples for testing (Johne’s fecal PCR test at a veterinary diagnostic lab) on all cattle 18 months and older with all positive animals either culled or segregated well away from the main herd until culled. This should be repeated annually until three negative tests are achieved on the herd. Be aware that this is expensive but the most accurate method to detect infected cattle.

The goal of seed stock operators with no confirmed cases of Johne’s disease should be to remain MAP-free. This is best accomplished by either maintaining a closed herd which breeds its own replacements and/or trying to insure any purchased cattle (including bulls) come from Johne’s certified herds. Entry in the Voluntary Bovine Johne’s Disease Control Program is recommended in order to show potential buyers a certified level of low risk for MAP infection.

What is the recommended herd testing approach for commercial cow/calf operators? Commercial herd testing depends on the goals for the operation and the resources available. The whole herd may undergo screening at once or subsets based on likelihood of infection or convenience. The overarching goal is to identify and cull “super shedders” (animals releasing millions of MAP organisms in the environment daily) because they can infect many animals. Additionally, identification of animals early in the disease process (but not shedding many bacteria) allows segregation into test (+) and test (-) herds to avoid further spread of the disease.

Herd screening with the blood test on all cattle over two years of age is inexpensive and designed for rapid testing of large numbers of samples. If using the blood pregnancy test, it may be run on the same blood sample. The test is not perfect; if the result is negative, it may simply mean the infected animal is not yet producing antibodies to the infection. False positive results may also occur, especially in herds where few animals are infected.

Herd screening with fecal PCR on all cattle over 2 years of age is fast and also gives a good approximation of the amount of fecal shedding but is expensive. Certain labs will pool fecal samples in groups of 5 to cut down on cost. However, if the pool is positive, all 5 samples are re-tested individually. Samples are easily collected when palpating or using ultrasound for pregnancy detection.
The most economical overall approach is to blood test the herd first then confirm all suspect and positive blood results by submitting a follow-up fecal sample for PCR.

Which animals in the herd are at highest risk of infection? Targeted testing of groups of cattle considered to be at highest risk of infection is sometimes preferable to reduce the time and expense involved in whole herd testing. This high risk group includes:
• All clinically ill (thin or with chronic diarrhea) cattle;
• Any replacement heifers born to known Johne’s-infected cows;
• Any dam of a MAP-infected animal;
• Cattle who were born in the same calving season and in same pasture as an infected animal;
• All calves born after the purchase and addition of a Johne’s positive animal to the herd;
• Animals purchased from one source at the same time as a MAP-infected animal;
• All purchased animals with no record of testing or disease history from the farm where the animals were born.

What test should be used before buying or leasing an animal? From the buyer’s perspective, a record of negative test results from the herd of origin maximizes the chances the purchased animal is not MAP-infected. However, if this is not available, both a fecal sample and blood sample should be submitted and negative results received on both tests before adding the newly purchased animal to the herd. Annual testing with feces and/or blood is advised, especially if no history is available from the farm of origin.

Is herd testing all that is needed to get rid of Johne’s in the herd? Johne’s disease control programs in beef cow-calf herds are based on testing and removing positive cattle from the herd and implementing management practices aimed at preventing calves from coming into contact with MAP-contaminated feces from adult cattle. Cattle with diarrhea and weight loss and those identified as being test positive must be separated from young calves and animals intended for breeding as soon as is practically possible. Johne’s positive cows in late pregnancy or raising a calf can be kept separate from the rest of the herd until the calf is weaned in dedicated isolation facilities (field or stall) that should not be used for grazing or housing other livestock. Following weaning, cows that have tested positive should be removed from the herd and sold to slaughter and their offspring should not be retained for breeding or sold as breeding animals. Offspring from cases that have already entered the breeding herd should be tested yearly.

Preventing exposure of calves to feces from infectious animals play a major role in the control of Johne’s disease. Keep perinatal cows (those ready to calve, those in the process of calving and those that have just calved) in as clean an environment as possible, limiting fecal contamination of the flanks, legs, udders and teats. If calving in a barn or stall, remove the dam and calf as soon as possible from the calving area and change the bedding frequently. Another option is to run completely separate ‘clean’ (non-infected) and ‘dirty’ (infected) herds, using only the clean herd to breed replacements from and gradually culling out the dirty herd.

Biosecurity measures to prevent the introduction of MAP should also be a key element in Johne’s disease control. The MAP organism is known to be extremely persistent in nature, with survival in manure and damp environments reported for up to a year or more. Therefore, manure is best spread on agricultural land (hay or crop ground) rather than pasture. Where this is not possible, there should be a gap (preferably of at least 12 months) between spreading manure on pasture and using it for grazing calves. Fecal contamination of feed and water sources can be reduced by providing city water for grazing cattle where possible, fencing ponds and streams, raising feed and water troughs off the ground, and using separate equipment for handling feed and manure. The involvement of wildlife such as deer or rabbits in the transmission of Johne’s disease is suspected but not proven conclusively. This could have important implications for the control of the disease since livestock pastures can have high levels of fecal contamination from these animals.

What does the future of Johne’s control look like? Although there is a vaccine for Johne’s, it does not prevent infection but it can decrease fecal shedding and slow disease progression. It is available on an extremely limited basis in the US because it interferes with TB test results and is unlikely to gain further approval. In the future, genetic testing may be used to select animals more resistant to MAP infection although the science is in its infancy. For now, testing and management to prevent transmission of MAP bacteria from adults to young stock are the best tools available for Johne’s disease control.